In Ogun State, the police revealed that they had arrested a housewife who stabbed and killed her husband’s nephew.

According to the Ogun State Police Command, the woman who is in her 30’s allegedly stabbed 18-year-old Habbeb Aremu on the neck after they had a minor disagreement.

The men of the Ogun state police command arrested the woman on February 5, 2022, after they received a distress call.

We recall that not too long ago, this same incident happened. The state police arrested three boys who killed one of their girlfriends for a “money ritual.”

Read More: Court Remands Young Boys Who Beheaded One Of Their Girlfriends For Money Ritual

In a statement, the police said Agbado divisional headquarters had received a distress call saying a woman had killed her uncle’s nephew. 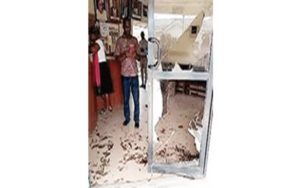 The police report said the woman stabbed her husband’s nephew after they had a misunderstanding over mirror glass, which the boy allegedly broke.

“It was the mirror glass which they were using in the house when the deceased allegedly broke it,” DSP Abimbola Oyeyemi said in a statement.

The allegation led to a disagreement between the deceased and his uncle’s wife, who took a kitchen knife and used it to stab the deceased on his neck. ”

The police added that when Dpo Agbado division, CSP Kehinde Kuranga and his men arrived at the scene, they arrested the suspect and found the victim in a pool of blood and rushed him to the hospital.

But he was pronounced dead as the doctor on duty confirmed that the boy had died.

His corse was later deposited in the Ifo general hospital mortuary for autopsy.