A primary school teacher named Makasusi Sunusi has been sentenced to life imprisonment after a high court found him guilty of defiling a five-year-old girl in Jigawa State.

The victim is one of the pupils of the school where Makasusi Sunusi teaches. 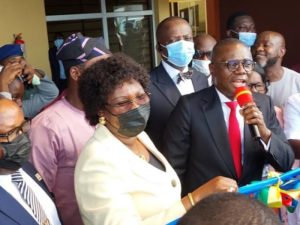 The public relations officer of the ministry, Zainab Baba Santali, said the Primary School Teacher took the 5-year-old girl into one of the school toilets to defile her on the 4th of February, 2021.

“The convict took the victim to one of the school toilets and defiled her. The victim’s mother noticed a strange discharge from her daughter’s private part and that’s how she started suspecting, ” Public relations officer of the ministry, Zainab Baba Santali, said.

Zainab Santali said the victim’s mother noticed a strange discharge from her child’s private parts and told her father.

When they asked the victim what happened to her, she called out the name of the convict, saying he defiled her in one of the school toilets. Zainab Santali added

“Her parents reported the issue to the school authorities and the police.” They conducted two separate identification parades and the victim identified the person who defiled her, ” Zainab Santali revealed.

Meanwhile, the ministry said that they do not have much challenge in the case because, despite her age, the victim knows the person who defiled her and she narrated how it happened. 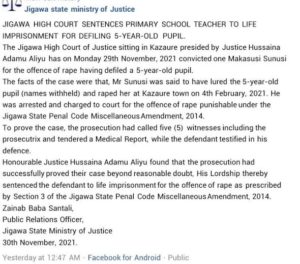 “Other witnesses and medical reports supported the testimony that the victim gave,” Santali said.

The ministry’s spokesperson said a private lawyer identified as Sunusi Musa represented the victim in high court and that it was free of charge. He took up the case after the Attorney-General of Jigawa State gave him the assignment.