The projects include some new warships and boats in the Naval Dockyard at Victoria Island.

LASTMA also gave further instructions, and one of them said that people should avoid Ahmadu Bello Way, from Adeola Odeku Intersection to Adetokunbo Ademola by the Eko Hotels Roundabout, as it will be temporarily closed to traffic and traffic will be diverted to Adeola Odeku and Akin Adesola to connect destinations. 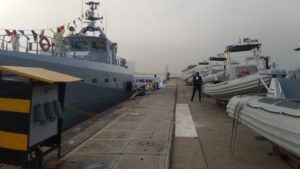 Due to the arrival of the president, officers from the Department of States Services (DSS), Nigerian Airforce, Police, Army, and Navy officers were present in Lagos, especially in Victoria Island.

President Buhari said the new warship, which was added to the naval fleet, will boost the authorities’ ability to secure Nigeria’s maritime domain.

Buhari added as he inaugurated the Seaward Defence Boat (SDB) III, which the Nigerian Navy built.

President Muhammadu Buhari said the locally constructed SDB, NNS Oji, is the third in his series of locally built SDBs in the Naval Dockyard Limited by Navy engineers. 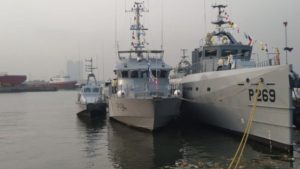 He charged the naval personnel to ensure good use of the new and recently acquired platforms, including KANO, IKENNE, NNS LANA, ABA, OSUN, and SOKOTO, and maintain professionalism.

“We are supposed to know that it is a critical period we are in where Nigeria is facing a serious decline in revenue and the security problems we are facing right now.”

“The present realities call for better resource management, accountability, innovativeness, and careful maintenance. I wish to repeat that despite these challenges, our administration is very determined to ensure that we support the Navy well, so they will be able to achieve their goal, “President Muhammadu Buhari said.

President Muhammadu Buhari said that the Because of the present high dependence on oil and gas revenues, the Navy is a major contributor to the economic well-being of Nigeria. 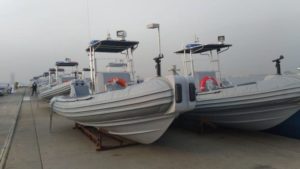 “Arrests of those who are involved in illegalities have yielded results as some pirates, pipeline vandals, illegal bunkering groups, and other miscreants have been convicted this year.” He added

“This kind of success is possible through the enforcement of our new anti-piracy law on the Suppression of Piracy and the Maritime Offences Act 2019. ” He stated