The Imo State police command confirmed that it was their police officers who arrested Uche Nwosu, the son-in-law of the former governor of Imo State, Rochas Okorocha.

The police command, who did not reveal why they arrested him, said contrary to reports saying that gunmen kidnapped Uche Nwosu, they are aware of his arrest and he is presently in their custody.

Yesterday morning, an aide to Uche Nwosu, Darlington Ibekwe, said some armed men took Nwosu during a church service in Saint Peter’s Anglican Church in Nkwerre, which is located in Imo state. 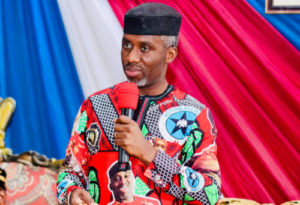 He added that Uche Nwosu was attending the thanksgiving service in honour of his mother, whom he had just buried when the incident happened.

Read More: Man Who Defiled His Close Friend’s 14-year-old Daughter, Gets Her Pregnant, Has Been Arrested

Police Arrest Couple Who Sold Their 1-Month-Old Baby For 50,000 naira

In a video which has been circulated on social media, the armed men invaded the St. Peters Anglican church, shooting aimlessly into the air to scare people to leave.

In the video, The people in the church were seen running to hide.

A voice was heard in the video claiming that the armed men’s vehicle carried the government’s plate number and revealed that they put Uche Nwosu in the vehicle’s booth.