Nigerians were on the roads of Osun State to protest on the 3rd of December, 2021 after a police officer allegedly shot a man dead, a man who was working as a drill operator with a drilling company

According to eyewitnesses, the incident happened yesterday morning around 11:00 a.m., and the incident caused tension, which made people protest, starting from the Otaefun area of Osogbo, Osun state.

Reports say that the driver of the truck in the drilling company, named Shekeenah Drill Tech, and his colleagues were trying to fix their truck, which stopped working at a turning point on the road, when police, who were allegedly pursuing some boys, pulled up and started confronting them. 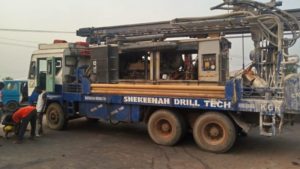 Eyewitnesses said that after some time, the policemen, who were six in number, slapped the drill operator while one of them shot him in the chest.

In a viral social media video, angry protesters carried the dead body of the late drill operator, who died on the spot after being shot. They were protesting and marching to the nearest police station.

Reports say that the victim’s name is Kabir, also popularly known as Mallam. 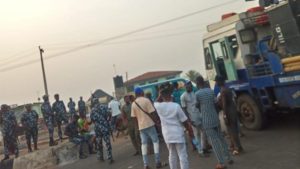 The incident caused protests which were led by youths and colleagues of the victim who carried his dead body to a nearby police station.