In Rivers State, the police arrested a member of the Onelga Security Peace and Advisory Committee (OSPAC) who killed a Nigerian Air Force personnel named Endurance Eugene in Omuanwa community in Ikwerre, the local government area of the Nigerian State.

Grace Iringe Koko, the acting police spokesperson, confirmed that the suspect, identified as Progress Emecheta, was detained by the State Criminal Investigation Department (SCIID) and that the case is being investigated.

The families of the deceased Nigerian Air Force personnel demand justice and the prosecution of their assailant.

Endurance Eugene’s elder brother, Onyemachi Eugene, stated that his brother was a member of the Nigerian Air Force who served in Lagos State.

His brother added that Endurance returned home to celebrate Christmas and New Year celebrations with his family when Progress Emecheta, who is also known as “Two Face”, who is a member of Omuanwa (OSPAC), shot him after they had a simple argument.

Reports say an incident happened on the 3rd of January 2022 when Endurance Eugene and his Airforce colleague went to the OSPAC office, which is located in Omuanwa, to release someone who they arrested as OSPAC had forced youths in the community to promise to renounce cultism and gang membership. 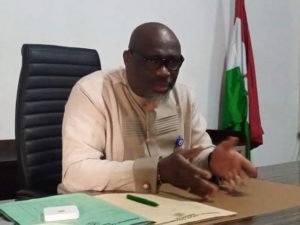 My brother came to celebrate this Christmas with his family, so an air force man, his colleague who he works together with, called him to say that the two of them would rescue his brother, who was arrested by the OSPAC.

When they arrived at the OSPAC office, the OSPAC force told my brother that he should leave because they had not arrested “his” relative. My brother asked if he had any issues with them before. So they started pushing each other and, before you know it, they started beating my brother. Then my brother left that place. ”

Read More  How We Kìlled My Wife’s Friend, Sold Her Head For N70,000 – Man Confesses In Ogun

“After that, this boy ran to his car to bring out a gun to shoot my brother to death. ” He said.