A suspect is accused of concealing 101 parcels of cocaine in a children’s duvet at Lagos International Airport.

According to a statement on Sunday, Femi Babafemi, NDLEA’s spokesperson confirmed the seizure of cocaine weighing 13.2 kilograms.

Femi Babafemi explained that in Murtala Muhammed International Airport in Lagos State, operatives of the agency seized the parcels of cocaine.

According to the National Drug Law Enforcement Agency, they discovered the drugs in the bag of a 52-year-old man who had returned from Brazil.

NDLEA arrested the man on Saturday, April 9th, 2022 at the D-Arrival Hall of Lagos airport upon his return from Sao Paulo, Brazil. 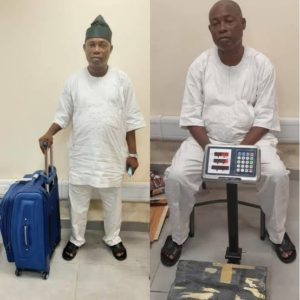 They discovered 101 parcels, a drug with a gross weight of 13.2kg in the man’s only checked bag.

During a preliminary interview with the media, the agency claimed that the man might be a carpenter and confessed to giving an operative of NDLEA what he stood to gain if he were to deliver the drugs.

Oscars Academy Awards Ban Will Smith For 10 Years Over Slap

The man said he was supposed to receive payment of 5 million naira for trafficking the drug after he successfully delivered the consignment to Lagos.

The NDLEA also revealed in a statement issued today that they made numerous arrests and drug seizures in areas other than Lagos. In a related development, the NDLEA claimed to have intercepted large pellets of skunk which was hidden in a detergent containers bound in Enugu’s Akanu Ibiam International Airport in south-eastern Nigeria.

A 37-year-old man who returned from South Africa was brought to Nigeria with a consignment weighing 730 grams.

The arrested the suspect with 11,190 Tramadol tablets during the outbound clearance of passengers traveling to Cameroon.

During the week, the National Drug Law Enforcement Agency made arrests in Edo, Zamfara, and Ondo states, as well as seizing 746.25 kilograms of cannabis in Akala, Mushin area of Lagos state.

Last week, the National Drug Law Enforcement Agency made a drug seizure in Port Harcourt. They described the April 4 seizure as the largest drug seizure they has happened at Port Harcourt International Airport, Omagwa, since they began operations.

According to Babafemi’s statement, the 39-year-old man is another returnee from Brazil who carried 73 sachets of cocaine weighing 8.15kg.