The first person in the world to have a heart transplant from a genetically-modified pig has died.

David Bennett, who had a terminal heart disease, survived for two months after the surgery in the US.

But his condition started deteriorating a few days ago, his doctors in Baltimore said. The 57-year-old died on March 8, 2022.

David Bennett had known the risks attached to the pig heart transplant surgery, and he accepted it before the operation, saying it was a shot in the dark. 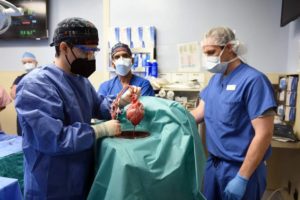 Doctors at the University of Maryland Medical Centre had special dispensation or permission from the US medical regulator to do the operation procedure on the basis that the patient, who is bedridden, would die otherwise.

He had the surgery on January 7, 2022, and doctors said the following week he spent time with his family, was watching the Super Bowl, and he even said he wanted to go home to meet his dog, Lucky.

In 1997, this Indian doctor tried pig heart transplant, was jailed

But his condition got worse and this made the doctors in charge “devastated”.

He proved to be a brave and noble patient who fought all the way to the end, said surgeon Bartley Griffith, who performed the heart transplant, said in a statement that was released by the hospital.

Dr Griffithhad said that the surgery would bring the world a step closer to solving the organ shortage crisis.

Currently, 17 people die every day in the US as they wait for a transplant, with more than 100,000 people on the waiting list.

It’s been a long time since they considered the use of animal organs for xenotransplantation to meet the shortage of demand, and using pig’s heart valves is already common.

In October 2021, surgeons in New York announced that they had successfully transplanted a pig’s kidney to a person. At that time, the operation was the most advanced experiment in the field so far.

But, the person was, at that time, already brain dead with no hope of recovering.