In Kano State, a court ordered that a man who is identified as Muazu Magaji Danbala should be imprisoned after he was accused of sharing photos of Kano State Governor, Abudallahi Ganduje, with his children on social media and captioned the photos with “Barayin Kano”, in the hausa language, which means “Kano Thieves” in English.

It was confirmed by all Kano courts. It was also revealed that the continuation of the man’s case will happen in Nomansland magistrate court on the 8th of November 2021. 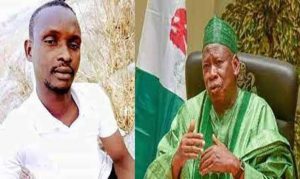 After Muazu Magaji Danbala was arrested, the security authorities revealed that another person who was identified as Jamila Shehu also shared a similar post. on her social media page, but she is currently on the run.

According to court documents, the court will charge the two with intentional insult, alleged conspiracy, inciting public disturbance and defamation of character. 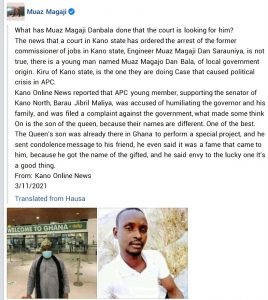 “On the 26th of October, both of them posted a picture of the Kano state governor and his children. Abdulazeez and Balaraba also captioned the photos with “barayin Kano,” meaning “Kano thieves,” knowing fully well that their actions might lead to a breakdown of peace within and outside the state. ” The court document read.