Reports of an Australian socialite identified as Stephanie Rodriguez who lost her leg to amputation due to complications from cerebral malaria are trending on social media in Nigeria.

Stephanie Rodriguez revealed that her experience majored life changed after she attended the Hive Africa Global Leadership Program conference, which happened in Lagos, Nigeria in September 2019.

Stephanie Rodriguez revealed how her story began. She said that it began in Lagos state, Nigeria. She said she spent one week in Nigeria to attend three programmes, including the Hive Africa conference, where she attended as the keynote speaker.

Stephanie Rodriguez gave a speech at one of the events that Travel Massive organizes in Lagos state. 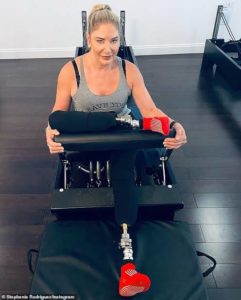 Stephanie Rodriguez said that the organisers of the event asked her to go outside where they were doing a photoshoot with the participants for almost two hours.

“The photo session took place near water which did not flow, and according to my doctors and everybody who evaluated my journey and experience, it is possible that during those two hours between 6pm and 7pm in September, it is highly possible that a mosquito bit me.” She explained it to the BBC during an interview.

Read More: 26-Year-Old Local Footballer Marries 54-Year-Old Woman, Says He Did Not Marry Her For Any Benefit

Two weeks after she left Nigeria, Stephenie said that she was in an airport in Boston, USA, preparing to travel back to Australia when she had a convulsion, which led to a coma.

Stephanie Rodriguez said they carried her to Havard Teaching Hospital where a doctor and her friends who are working at Gate Foundation suggested that she should be tested for parasites. 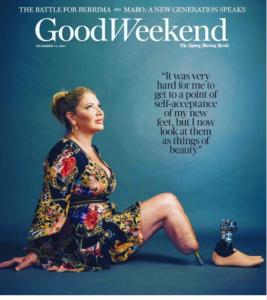 As they tested my blood, they discovered what made me sick: plasmodium falciparum, also known as cerebral malaria, she revealed.

Cerebral malaria is the most serious nerve complication that someone could get if they are infected with a malaria parasite. Multiple organ failure and coma are major characteristics of cerebral malaria.

The severe malaria infection can affect someone’s memory and can affect the eyes and lungs, leading to blindness or dumbness.

Stephenie said that according to what the Havard hospital doctors told her, the plasmodium falciparum parasite took over 8% of her blood volume. It took over her kidneys and liver, and her whole body started shutting down, and she entered a serious septic shock.

Septic shock is when an infection spreads all over someone’s body, causing all the organs to cause dangerously low blood pressure and shut down.

Stephanie Rodriguez revealed that the Harvard hospital doctors did not explain to her family what the collateral damage would be because even they could not predict how her body would react.

Doctors gave her vasopressors as their last attempt to save her life. Vasopressors are a group of medicines that tighten the blood vessels and raise blood pressure for people who have a critical illness because very low blood pressure leads to organ failure and death. At that critical moment, with only a few minutes of life, the doctors told her family that they could only do one thing, and with her family’s permission, they gave her 100% vasopressors, which is pure overdose.

The 100% vasopressors mean that the doctors stopped her blood from reaching some parts of her body, like her legs and hands, and moved her blood back to her heart when the heart almost stopped pumping.

“These were the drugs that were used to remove my blood from my legs and hands, and when I woke up two weeks later, I saw my bandaged feet and hands. They were damaged, and nobody could tell me what would happen to me in the future. ” She stated.