A 29-year-old man who is identified as Adeniyi Samuel has reported to the Ogun state police command about a 35-year-old man named Wasiu Eluyera who offered him 10,000 naira to kill his pregnant wife.

The man was reported to have been trying to get rid of his pregnant wife so that he could keep her pregnancy from his new wife.

The state police said the two suspects were arrested after they received a distress call from the DPO of Ogijo divisional headquarters, Ogun State, on the 1st of January, 2022.

As the Public Relations Officer of the Ogun state Police Command, Abimbola Oyeyemi, said, the police were told that the two men were fighting in the Oponuwa area of Ogijo and, as residents were afraid that they might get injured, they called the police.

The DPO of the Ogijo Division, CSP Muhammed Baba, had deployed his troops to the scene and the two suspects were arrested. 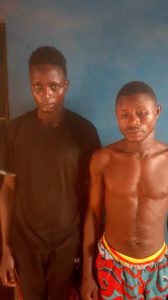 “It was during interrogation to know the cause of the fight that Adeniyi Samuel opened up and informed the police that Eluyera Wasiu contracted him to kill his pregnant wife, Bola Taiwo.

“He stated further that Eluyera Wasiu promised to give him N10,000 for the job, out of which he had already given him N5,000 to pay the balance on completion of the job,” Oyeyemi said.

According to the police public relations officer, the police preliminary investigation revealed that the man, Wasiu, had been married to Bola Taiwo before they divorced, and he later got married to another woman who now lives with him.

However, it was said that the husband reunited with Bola Taiwo, who later got pregnant for him.

To avoid his wife learning that he had reunited with his ex-wife and even gotten her pregnant, Wasiu told Bola Taiwo to abort the pregnancy, but she refused.

Afterwards, he made the decision to kill her and the pregnancy. These facts were revealed by Oyeyemi, the other suspect who confessed.

In his confessional statement, he stated that he had twice bought food for Taiwo from one eatery and laced the food with poison, but the lady, by providence, did not eat the food.

“It was when all his personal efforts to kill her failed that he contracted Adeniyi Samuel to help him eliminate his pregnant wife” Oyeyemi quoted Wasiu as having written in a statement.

Wasiu also confessed that he personally sent his accomplice to Bola Taiwo’s house, and gave him his pregnant wife’s photo so he could easily identify her and kill her.

But when he didn’t carry out the assignment as agreed, he demanded the refund of the advance payment he had made to him, and his refusal led to the fight that led to their arrest, the spokesperson of the Ogun state police command explained.

The Commissioner of Police has ordered a full investigation into the case.