Police have arrested three members of the same family over the death of an eight-year-old boy, identified as Raheem Bamimore.

The incident happened in the Saki community of Ogun State.

Police later arrested the suspects, who were two teenage brothers and their father.

According to police, the suspects said their aim was to kidnap little Bamimore and collect money from his parents. On Sunday, the 6th of March, two days after he was declared missing, they saw his dead body on top of a stretcher heading for Ogbooro road near Al-Barka.

The report says the suspects used mango to lure the little boy who had just returned from school.

For the sake of school, the boy simply dropped his schoolbag to answer the people who called him, and the people in the house thought that he had forgotten something because of how he rushed out of the house.

However, the twin brother claims that there were some people who stood near their house calling him Raheem. 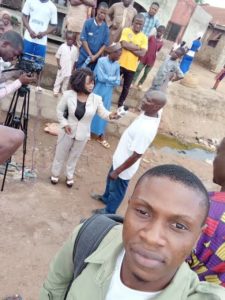 After days of searching, neighbors saw the dead body of Bamimore on top of a stretcher.

The father of one of the main suspects shouted when he saw his dead body.

It was the man’s reaction that made people come out and call the officials of the local vigilante in the area, Amotekun.

Amotekun officials took the teenagers and handed them over to the police, but members of the community did not agree, as they wanted jungle justice.

“Raheem’s father has money, and we wanted to take it from him. That’s why we kidnapped his son, “the two main suspects, who happen to be teenage brothers, told the police.”

They claim they took him to an unfinished building and tied him up.

The boys said they had planned to release him because no one had contacted them, but they realized that the boy had recognized them, so they collected some rat poison, which their father makes, and poisoned him.

Their father, who is one of the suspects, is also in police custody.

Members of the Saki area were affected by the incident, and are greatly angry.

Many people from the area walked to Saki Police Divisional Headquarters and protested, telling the police to bring the suspects out because they didn’t trust their handling of the situation.

But Oluyinka Kolawole, the DPO of Saki police station, assured the public that the matter would be solved.

The police are currently investigating the case, and the Commission of Police is now aware.