Eight children have died in a gas explosion in Abuja.

“The last born, who is just two years old, died in the incident. She could not survive. Other people are in critical condition. I just hope that they survive.”

This was what Hassan Salihu, brother-in-law to the family that consists of the six children who were part of the 8 children who were burnt in a gas explosion in Venus Street, Uncompleted Building, Dagiri, Gwagwalada Area Council, Abuja. 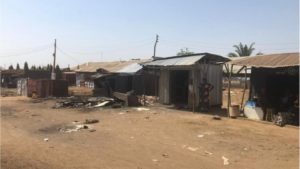 Mrs. Comfort Ojo, who is an eyewitness of the gas explosion, narrates what happened. She revealed that if she had not followed her mind, which told her to leave the shop where she went to buy something, she would have been affected by the gas explosion.

Read More: Four Children Die And Five Others Injured While Playing In Bouncing Castle In Australia

“When he noticed the customer’s cylinder was leaking, he transferred the gas from the leaking cylinder to another.”

“As he bent down, I went from my shop to buy vegetable oil from the next shop, which I would use to fry the fish that I sell. The boy did not know that there was a fire in their shop. My mind kept on telling me to go back to my shop because I had forgotten the container I wanted to use to buy vegetable oil.”

“So my mind told me that I should go back to my shop. I was not far from the shop when I was going back and that’s when I heard gbum! That was when I and everyone nearby started running. Before we knew it, the second cylinder blew up too. I jumped into the shop where the neighbor’s children were cooking and that’s when the fire started.” She said 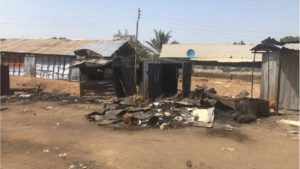 Broder’s in-law to the family, Hassan Salihu, said when he saw the fire outbreak, he ran into the shop to save the last born who was sleeping and rushed her to the hospital, but she did not survive. She was just two years old.

“It was my wife’s sister’s shop that was on fire. I ran into it to save the last born. It was almost six of them that were inside. The last born I saved from the fire did not survive. She died at midnight.” He revealed.

“A girl who came to the shop to buy pure water did not survive either, so it was almost eight people that the fire burned. Two of them have died, while others are in critical condition in Gwagwalada Specialist hospital and another hospital that is nearby, “he added.