The Department of State Security (DSS) has denied reports and rumors that say they are violating the human rights of the leader of the Indigenous People of Biafra (IPOB), Nnamdi Kanu.

Today, the DSS briefed reporters, saying that Kanu’s lawyers use fake news to mislead and get favour from the public.

The Spokesperson of the DSS, Peter Afunanya, was the one who briefed the reporters on behalf of the DSS in their headquarters in Abuja, and he said that Kanu is enjoying full luxury in custody, contrary to allegations from his lawyer which say that they violated his human rights. 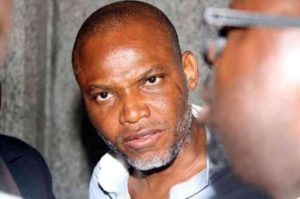 He added that contrary to the reports by the Indigenous People of Biafra (IPOB) propagandists saying he doesn’t change his clothes, he changes his clothes regularly.

Read More: You Determine His Release, Not the Judiciary – Ejimakor Replies Buhari

Why His Trial Was Adjourned Till Next Year

Photos Of Kanu In Court Today

He said that it is unfortunate that Kanu’s lawyers want their client to be transferred to Kuje correctional Centre and never revealed why they made the decision. 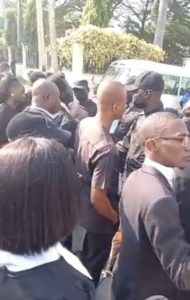 The DSS’s briefing came after Kanu’s lawyers filed a fundamental human rights enforcement suit in the Federal High Court in Abuja against them.

Local reporters released a report saying that a member of Kanu’s legal team, Maxwell Opara, said that Kanu’s life was in danger in DSS’s custody.

They accused the DSS of lying, saying they had taken Kanu’s blood samples 21 times for a test whose name was not revealed or was not known to them. They said the DSS was starving their client; he was battling with hunger, and they would not allow him to change clothes. 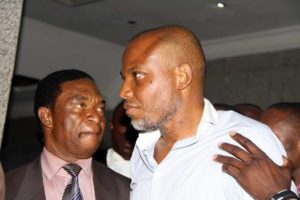 “We visited Mazi Kanu and he told us about what he is experiencing. They did not allow him to change clothes, while they also let him starve. He also told us that a doctor took his blood samples 21 times for a test, but they refused to reveal the name or what the test was about to us. Therefore, we have filed a fundamental human rights enforcement suit in that regard, ” Maxwell Opara told local reporters.

We recall that earlier this month, the Federal High Court in Abuja ordered the DSS to allow the Ipob leader’s maximum possible comfort.

The Federal High Court gave the order after the leader’s lead lawyer, Ifeanyi Ejiofor, complained to the court that the Department of State Services, DSS, was denying his client’s fundamental rights. 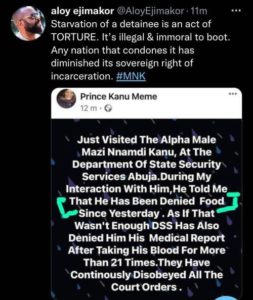 He added that his treatment in their custody is not right as they kept him in solitary confinement and complained that it would cause him psychological trauma or problems and that he was not getting medical help.

He stated that his client has not changed his clothes since the DSS detained him and they did not allow his lawyers to see him.

After that, Justice Binta made an order that the DSS allow him to change his clothes.