In Abuja, Minister of Justice, Abubakar Malami, says he is not involved in Justice Mary Odili’s home invasion.

Abubakar Malami warned the authorities to count him out as a suspect and revealed he is clearing this situation because of how the stories about Justice Mary Odili’s home invasion are going.

Hours after the invasion, Malami’s media assistant, Umar Jibrilu Gwandu, released a statement which cleared the situation. Today, the 30th of October, 2021.

The media assistant stated it is important to set the record straight that, as the Chief Law Officer of the Federation, The Minister will not stoop so low to be associated with the court’s process which they used to obtain the search warrant.

The Minister added that the public needs to know that nothing is called the “Joint Panel Recovery Under the Ministry of Justice” inside the Office of the Attorney General of the Federation and Minister of Justice. 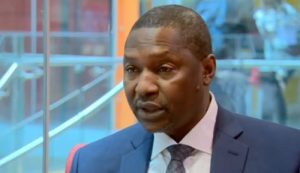 The Attorney General added that, even by extension, nothing like that is in the entire Federal Ministry of Justice.