In Lagos, the Catholic Church suspended Reverend Father James Anelu of Holy Trinity Catholic Church, Ewu-owa, Ikorodu, after he banned Igbo songs from the church and also made unacceptable comments about the songs.

The priest had stopped an Igbo chorus during mass and said Igbos should not dominate other people in his church.

In a viral video, the church members expressed their anger at what the priest said, and some of them walked out.

The Igbo are one of the major tribes in Nigeria, and the people of the tribe are scattered around the world. 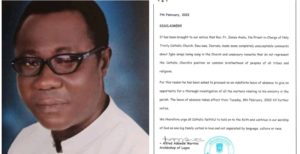 Many native Igbo speakers live in southeast Nigeria, and the region where the pipo is most prevalent includes Abia, Anambra, Ebonyi, Enugu, and Imo states.

In a press statement which the Archdiocese of Lagos released on the 7th of February 2022, they said they asked the priest to go on an indefinite leave of absence so they could investigate the matter.

“It has come to our notice that Rev. Fr. James Anelu, the Priest-in-Charge of Holy Trinity Catholic Church, Ewu-ona, Ikorodu, has made some comments which are not acceptable about Igbo songs which they sing in church and made comments which do not represent the Catholic Church’s position on common brotherhood of people of all tribes and religions.”

Read More: Abuja Court Strike Out The Murder Case Of OAU Student Which Involved Hotel Owner And Others

“We have asked him to proceed on an indefinite leave of absence, so we would do a thorough investigation into the matter, which relates to his ministry in his parish. The leave of absence would begin on Tuesday, February 8, 2022, till further notice, ” the statement said. 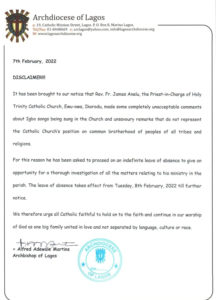 The church urged all Catholic members to continue worshipping God as a big family, which is united in love and which is not separated by language, culture, or race.