The three main contending candidates in the November 6, 2021 governorship election in Anambra State have agreed that there was wastage of resources in the state, emphasising the need to deploy technology to increase the state’s Internally Generated Revenue (IGR).

The candidates of the All Progressives Congress (APC), Senator Andy Uba, Prof. Charles Soludo of the All Progressives Grand Alliance (APGA) and Chief Valentine Ozigbo of the Peoples Democratic Party (PDP), all agreed that the people of Anambra deserve more than they have gotten and stressed the need to block leakeges so as to serve the people of the state with the development they had hoped for.

They said these at a live telecast governorship debate hosted by Arise Television in Awka. They jointly agreed to the need for dialogue with the Indigenous People of Biafra (IPOB), a group agitating for the secession of the region.

Ozigbo, the PDP candidate, who accused the incumbent administration of misconduct, incompetence, and laziness, stated that the incumbent inherited about “N75 billion in cash,” but would be leaving a huge debt profile of “about N130 billion.”

He added that if the people elect him as their governor, his administration would ensure that the state is conducive to investors, block leakages, and increase the state’s Internally Generated Revenue (IGR).

He stated that the IPOB issue has escalated due to the way the Federal Government of Nigeria has handled it. He agreed with some of the agitations of the IPOB, but he said, “I condemn their excesses”.

Soludo, the candidate of the ruling All Progressive Grand Alliance, said that the current outgoing administration in the state had improved the IGR from N10 billion to N28 billion, but promised to set up the Anambra Development Fund, improve the ease of doing business, as well as set up formidable institutions to attract investments and improve the economy of the state if elected. 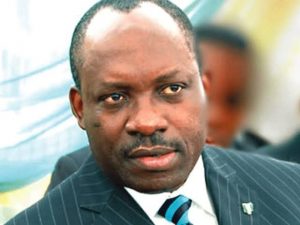 In the same vein, other aspirants, including Geoff Onyejekwu of the Allied People’s Movement (APM), Chief Ben Etiaba of Action Alliance (AA), Dr. Chidozie Nwankwo of the African Action Congress (AAC), Chief Akachukwu Nwakpo of the African Democratic Congress (ADC), and Dr. Obinna Uzoh of the Social Democratic Party (SDP), voiced the need to secure the lives and property of the state, stressing that only in a secure the state,