Though no official reason was given for this action but this cannot be unconnected with the fact that Egbunike hails from Anambra State.

DSP Nkeiruka Nwode who is the Spokesperson of the  Monitoring Team for the poll, while disclosing this sudden change of baton reiterated that this development will have no effect on the conduct of the Anambra election.

The atmosphere in Anambra State for this poll has been tainted with anxiety, fear and hope as to who takes over from the incumbent; Willie Obiano who has reached his term limit.

As the people of Anambra decide the person and the political party who take the reins of power in the state, we cannot but believe that the electorates’ decisions at the polls today will count. 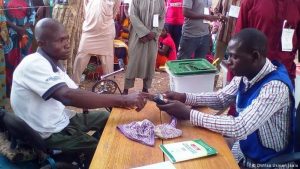 Remember that in recent times, people’s decisions have been upturned by court order.